The video game that killed video games in America, and ended American dominance of the industry for three decades: E.T. the Extra-Terrestrial, for the Atari 2600. The worst video game ever made. So bad, with millions of unsold units of plastic cartridges enclosing silicon semiconductors, that they had to bury them in the desert.

Atari: Game Over details the game, the industry crash of 1983, and the unearthing of the game’s cartridges in 2013. The trailer:

Atari: Game Over is now available for streaming on Netflix.

So, it looks like it won’t be TOTAL crap, but definitely B-Movie material. (Daenerys or not.)

(One positive aspect: they brought back the time travel thing, which is pretty critical to the series. Without it, it’s just not a Terminator film.)

Mad Max struggles just to survive, heroism is always a side-effect of that.

Whereas James Bond is a hero, but his job requires him to do decidedly unheroic things sometimes.

Both movies look good, but Spectre looks better. Not because of production values (though they obviously spent a LOT of money), but because Fury Road is way too heavy into the CGI. And it looks fake.

When did practical effects become taboo? They bring a viscerality to a film, which is why gritty, low-budget horror movies are so frightening. And Mad Max needs that visceral, grimy feel, not the plastic Uncanny Valley impression CGI effects give.

Unreliable narrators? In a commercial? Take a look.

And now, the “Spartan Locke” version.

Gee, I wonder who the BAD GUY could possibly be?

Okay, so less Rashomon and more alternate timelines? Ah, whatever.

Still it’s a Halo game, in a generation where, two years in, and games on the ground are pretty damn thin. So, even though I skipped the Collection (good thing, too) I’ll probably pick this up.

Maybe. Sooner or later. If it don’t suck. We’ll see.

October 27th, Xbox exclusive. Are you excited yet? Me, too.

I lied. They’re not really battling. And one isn’t even a trailer, it’s an Honest Trailer.

Both are worth watching, though, so let’s kick it!

Wait… these are the BAD guys? Gimme a break!

“Mr. Bowman, I wouldn’t normally release someone with this type of infection, but since the rest of the movie kind of depends on me doing so, I’ll do it anyway!” Thanks, random doctor guy, for letting zombies wander free from clinics where they’re safely locked up so they can eat people and spread their deadly disease! Zombie Abigail Breslin’s dad thanks you, too!

(Abigail Breslin was a person pretending to be a zombie in Zombieland, now she gets to go all the way! That’s karmic justice, man. Like a circle of life thing, ya know?)

Alright, it’s kind of odd for me to be making fun of a trailer for a movie I’m actually looking forward to, so instead let’s make fun of a movie that’s already out, but which I hated!

(PS: I watched How It Should Have Ended for this flick. It’s not so good, sad to say.)

So, Community. A wildly erratic show, even at the best of times, it ranged from heartwarming television genius to, frankly, crap. (Even setting aside the abysmal fourth season. Which never happened, you hear me? Never!) The problem was, even during the heart-warmingest of heart-warming episodes, the show always evinced a cold, analytical, cerebral core.

Community was seldom about what was ostensibly going on onscreen, but rather about the medium of television and movies itself. If functioned less a coherent series than a series of one-offs commenting on whichever TV show or movie they decided to highlight this week, now Law and Order, now 1970’s dystopian sci-fi, now GI Joe.

It was as if Dan Harmon (the creator) was a Vulcan mortician, dispassionately dissecting genre after genre, laying bare its tropes and foibles. The best of these were when Harmon used the separate elements to tell great stories. The worse came across as Harmon lecturing the audience about every minute element of the genre in question, as if the episode were a twenty-two-minute college-level TV Tropes lecture.

At its best, it melded meta-humor and meta-commentary with genuine character-based humor and drama (as in the “Abed’s Uncontrollable Christmas”, a paean to stop-motion Rankin/Bass Christmas specials), at its worst it bogged down into mere referentialism. “Oh yeah, that’s like what they do on that other show.”

(Season four was even worse. It wasn’t even referentialism but self-referentialism, a parody of the show’s satirization of various genres.)

This isn’t to say I disliked the show. On the contrary, I loved nearly all of it. One week a zombie apocalypse would wrack the college, the next the guys would find a magical and peaceful garden built around a trampoline. I could hang with that kind of random weirdness (as this blog clearly shows). But the rapidly changing premises, genres, and even character traits and relationships were disorienting. Most viewers found them off-putting and so tuned out.

Still, by a series of odd events too baroque to describe as miraculous, the show managed to stagger through five seasons before being canceled by NBC, only to be resurrected by Yahoo Screen! for it’s oft-referenced sixth (and presumably final) season. (“Six seasons and a movie!”) Yesterday Yahoo Screen! posted a trailer for Season Six, entitled “Community: Age of Yahoo“. 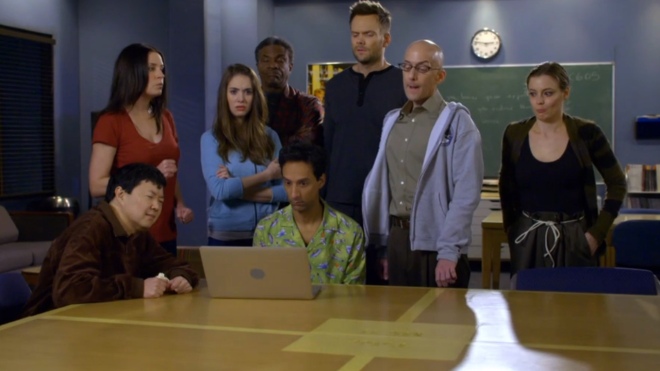 As it’s sort-of based on some parts of the Avengers: Age of Ultron trailer (though not closely), the trailer at least evinces the core of the Community vibe. The addition of Keith David (famed for They Live and numerous video games, including Saints Row IV) and Paget Brewster (late of Criminal Minds) is promising, and hopefully enough to compensate for the loss of nearly half the original “group” (Pierce, Troy, and now Shirley).

In any case, as they’re made by Dan Harmon, I’ll be checking out each episode as soon as I can. I just hope they’re more “Basic Lupine Urology” and less, well, less Season Four.

Here’s to the sixth season, and a possible movie. Hell, after getting this far, I wouldn’t count Harmon out.

There is a building, one building, that sits at the nexus of all possible parallel Earths. An Earth destroyed by war. An Earth ravaged by disease. An Earth where presidents died, or lived, and history is completely different than ours.

In Fox Digital’s Parallels, debuting today on Netflix and other VoD services, an MMA fighter, his sister, and their neighbor enter this one building and are whisked away to alternate universes, leaving their own far, far behind.

So, brutal honesty time: is it going to be any good? Probably not.

Am I going to watch it? HELL, YEAH!

So of course, I’m going to watch this. I may even report back on how bad / not-as-bad-as-I-thought-it-would-be it was.

If I don’t come back, the building got me.