Okay, the hoverboard was a hoax. But the hoverbike is not.

Oh yeah. Hoverbike. The word itself is straight out of some cyberpunk RPG, but it exists.

I’ll wait while you dash for your bank.

More details, and a pretty spiffy pic of the almost-flying-machine, available at the link.

Ars Technica gives a resounding “Maybe!” and bothers to explain why. The technical and — no lie — legal details are fascinating. Give it a read.

I’m too stunned to swear. Seriously.

This video deserves a “Holy Something Something!” but my brain is too paralyzed with shock to fill in the vulgarities.

Two guys, with smartphones, recording a tornado that swoops down on their trailer park. It’s like those shots of a looming kaiju in Pacific Rim, shot from ground level, looking up at the massive form of a monster striding across the landscape.

Only it’s a real guy, out in the open, looking up at the swirling vortex of a tornado.

THIS IS NOT A MOVIE. This is real goddamn live footage shot by amateurs. (Oh, look at that. A swear. I must be over the shock.)

It’s a two-minute video. Give it a watch.

…for sale. But a lot cooler than the last ones. See for yourself: 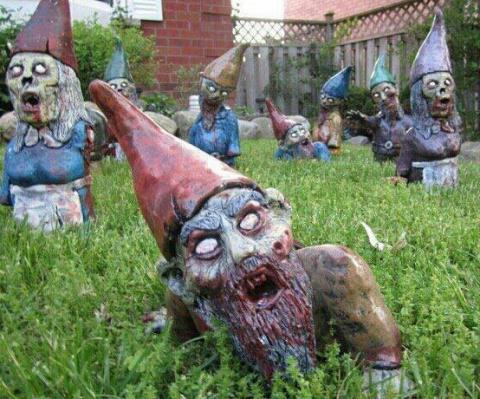 Yeah, that’s what you want on your lawn. Though, if you do, Revenant FX has you covered.

There’s dozens of zombie lawn gnomes to choose from, plus a Crystal Lake slasher, Texas Chainsaw butcher, even a Rob Ford lawn gnome. (Oooh, Scary!) Buy them for Halloween, or a gag gift, or heck, everyday use. (If you want to scare the hell out of the neighbors.)

Just don’t turn your back on the little bastards. You never know when you’ll hear the pitter-patter of tiny undead feet…

Talents are strengths that are unique to your character: things you do well, that no one else does quite the same way you do. Troubles are unique problems that beset your character on a regular basis. After choosing a Template, either pre-gen or one of your own making, you next select a Talent and a Trouble that are tied into the Template. (I’ll talk about how to do that in a bit.)

Talents: A Talent is a short phrase that describes some unique advantage your character possesses, like “Face of a Saint“. A thief with that Talent looks fresh-faced and innocent, no matter the circumstances. Even if they’re caught red-handed with stolen goods, people will tend to believe they weren’t involved or, at worst, were an unwitting dupe of the real thief.

Talents can represent innate knacks (Violin Virtuoso, Born With a Gun In His Hand), inherent advantages (Voice Like an Angel, You Gotta Love ‘Im), unusual training (My Uncle Was a Kung Fu Master, The Necronomicon is in My Backpack), or anything else that gives the character an edge. All characters have at least one Talent (that ties into their Template) but can have one or two others, for a total of three.

Talents give a bonus in any situation where they could reasonably apply. Face of a Saint, for example, might help you fast-talk a policeman (“Oh please, officer, can’t I stay here for just a second longer? My dad will be right out.”) but it probably shouldn’t help you do it over the intercom. (“Face” implies seeing the character.) This is something of a judgement call, but the GM has final say.

The first time a Talent is used in a module, it’s worth a +3 Skill Bonus to one Combat or Skill Challenge. The second time, +2 to a different Challenge. And the third, and last, it’s worth +1. Talents refresh between modules, back up to their full +3.

Talents aren’t just “doing better” mechanics. They also help illustrate who your character is. A character who is A Real Class Act is very different from the Who Are You, Again? guy, even if they have the same template.

Yes, Talents do give bonuses but they also personalize a character, making them distinct. Other characters might have the same Attributes and even skills, but none have the same Talents.

A Note On Balance: The most important part of Talents is the flavor, not the game balance. Some players might try to word one so its useful in as many situations as possible, others so it can be used with every single type of weapon. Neither of these are much of a problem, because Talents can only be used three times in one module, and weaken each time they’re used. They’re self-limiting. As long as the Talent is interesting, flavorful, and apt for the character, it’s fine.

The same holds when deciding if a Talent applies to a particular situation. For the most part, if it makes sense, allow it. “My Uncle Was a Kung Fu Master, so I know about Martial Arts styles (Knowledge Challenge).” Maybe you should allow that, maybe not. But don’t stress over it.

Talents are self-limiting, and if the player gets a +3 on the Knowledge Challenge, they’ll only have a +2 on whatever comes next, so feel free to let them use the bonus. Again, the mechanic is self-limiting, so you don’t need to police them all that stringently. Go ahead and disallow clearly ridiculous uses, but err on the side of “okay” rather than “no”.

I don’t know that I buy it, but this reviewer is sure. And he makes a pretty convincing case.

Of course, it depends what your definition of “deep” is. God knows, compared to much of the shit the movie industry pumps out, Predator is solid gold. (Not just Hollywood, mind, I’ve seen plenty of shitty Italian, French, British, Australian, and Japanese movies as well.)

My suggestion? Read the article and consider its arguments carefully while you rewatch Predator. Deep or not, the movie kicks ass!

[After a quick break for vacation and minor surgery, let’s get back at it, shall we?]

Character creation comes in three flavors: detailed, where people crunch the numbers all by themselves; quick-and-dirty, where they pick Attributes and skill values from pre-defined arrays; and, easiest of all, pre-generated characters where everything except certain skills are chosen already (including equipment and other mundanities).

Pre-gens ensure that character creation is basically effortless, a big plus for new players. They also illustrate the range of character types available in the setting. A quick flip through the pre-gens lets you know what character types are possible and well-suited for the campaign.

All characters, no matter how they’re created, are built around a template: a title that illustrates the core concept of the character. Renegade Magus. Vengeful Hunter. Doubting Cleric.

This title, usually in the form of , tells you what the character is: warrior, noble, scientist, werewolf, alien, pulp super, etc. That’s the part.

The part tells you something of their situation, personality, motivation, and so on. It tells you what is unique about this character, how this wizard is different from every other wizard.

A character’s template is the simplest, clearest expression of their core concept. It is the seed crystal around which everything else about the character — Attributes, skills, and so forth — forms.

Even characters built from the ground up need one of these handy titles, before anything else is chosen. The player should choose what kind of character he wants (Magician, Secret Agent, Duelist) and a word or phrase that describes their situation, background, or personality (Driven, Disavowed, Cautious). They can mix and match these two as they see fit (within the limits of the campaign world). Choosing a template is the very first step in the character creation process.

Hunted Wildfang Werewolf, Reluctant Wushu Warrior, or Greedy Cyberlegger, the template lets you know exactly who they are. And that’s important for both players and GM’s.

The template is so critical that two other character elements are directly tied to it: Talents and Trouble. I’ll talk more about both next post.

[Note: For all the Torg players, you know the templates. The names are iconic: Dark Avenger, Curious Mage, Renegade Hospitaller. This template system will work more or less the same, except that the template name is, while not quite a mechanic in and of itself, the hook on which all the other character-oriented mechanics are hung.]

The House of Geekery!
Blog at WordPress.com. The Twenty Fifteen Theme.
Follow
Build a website with WordPress.com